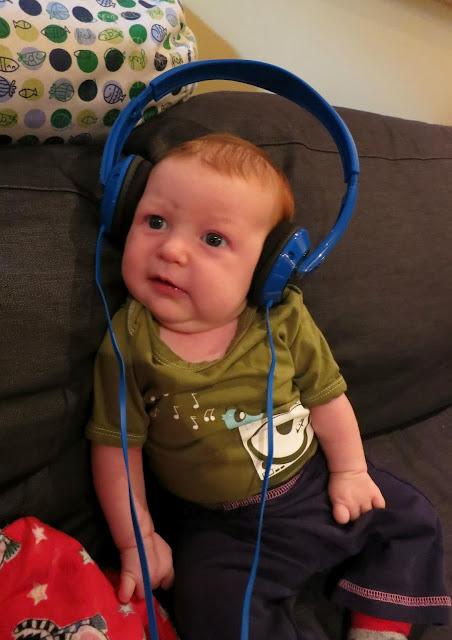 Just teaching my baby the finer points of beatmatching...
Posted by Caitlyn / CPI at 11:06 AM 1 comment:

Email ThisBlogThis!Share to TwitterShare to FacebookShare to Pinterest
Labels: rant


Aaron Lumley - Medicine Wheels:  Aaron Lumley rocks solo bass music like Colin Stetson rocks sax.  There, I said it.  It was lazy, but I said it.  Mostly because of mental fan fiction of these two monsters of Canadian music going at it.  (mostly playing, only some kissing.  But they are both super cute.  Gentle touching.)  His new album Wilderness is solo upright bass gold.  Highly recommended for fans of contemporary instrumental music, the more texturally focused David Bailey, John Zorn's solo works, and Eyvind Kang's improv.

Big Black Delta - IFuckingLoveYou (Sei A Remix):  There's something a tad awkward about this banging tech that I just love.  The pop is there, but it almost feels like a concession to the mechanical beast always threatening to swallow it.

Chromatics - Into The Black (Voxels Remix) (Neil Young cover):  It's long and plods onward, but oh I can't resist this song!

Fang Island - Asunder
Fang Island - Sisterly:  New album is Major and while I'm not sure if it's as TOTAL FUN as their last one, the fun meter is percolating higher and higher on each riff.

Giraffage & XXYYXX - Even Though (Teen Daze Remix):  This beat is infectiuous and the symptoms present as uncontrollable chair bouncing and uncontrollable smiling.

Poliça - Violent Games:  Another great track of the vocode-loving Give You the Ghost.

Scot Drakula - Kick Out The Amber Lamps:  THERE IS A VALUABLE LIFE LESSON HERE.

The Mast - Up Up Up:  Basspop table action!

The Walkmen - Heartbreaker
The Walkmen - Nightingales:  I am not super in to the new album Heaven, but I do really dig these 2 tracks.


Stay on top of everything new at http://djcpi.blogspot.com